In Loving Memory Of... 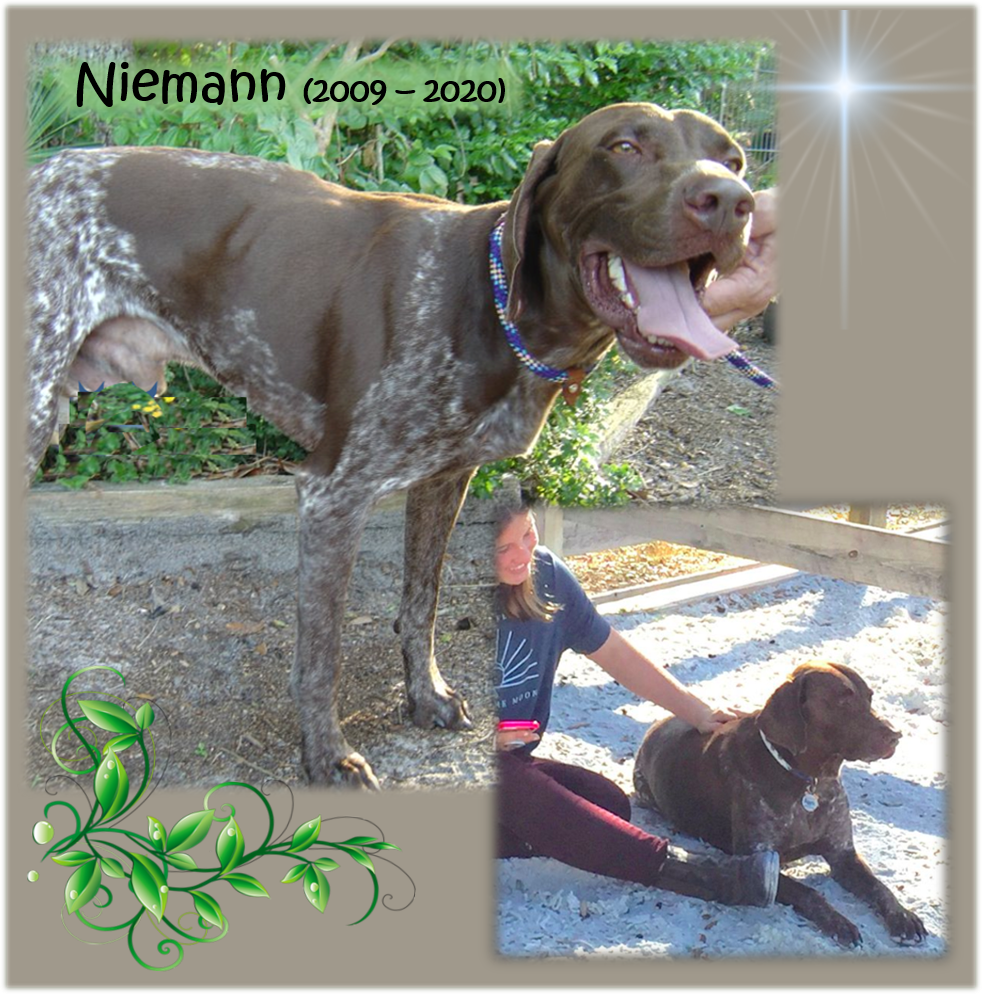 Some dogs in rescue touch us more than others for a variety of reasons. Our 2012 alumnus Niemann had a tragic entry into rescue, but the most incredible success story.  Sadly, we were notified that Niemann passed away in November of 2020 and we want to honor his memory by telling his story.

Our Florida State Coordinator, Dorothy, fought so hard for Niemann from the very beginning.  She received a call from the shelter about a dog that had been hit by a car and had two open fractures in his tibia, and she immediately agreed to take him into rescue. But it was a holiday weekend so they wouldn’t let SEGSP take him. She pleaded with them but they wouldn’t let us get him. So there Neimann sat with a wide-open fracture that, of course, got infected.

After we got him out and he was examined by a local vet, there was no choice but to amputate Neimann’s leg. And by the time we found a foster home there was a big chance we might lose him. But he persevered and Neimann, named after a Florida football player, was saved.

Our Florida volunteers Beth and Linda transported Neimann to his foster home with Richard and Marjie once the shelter released him and said he was beautiful and such a trooper - he never once cried or complained and he had to have been in a lot of pain.  After his first surgery Linda went to visit Niemann every day.  He won the hearts of all the SEGSP coordinators and volunteers.

However, it was difficult for Niemann to manage with three legs because the amputation never wanted to heal properly because it had been cut off in the wrong place. So, after two more surgeries Neimann finally healed with the love and guidance of his foster parents Richard (a Veterinarian) and Marjie, who later became his forever parents and affectionately called him the horse show dog. From Dorothy, “Richard and Marjie fought so hard for him, we all felt he had to be saved.  His death is like losing one of my own.”

From Richard, “In November he had mild anemia for a couple weeks. Didn't feel great but not terrible. Then one evening Marjie had him at the barn, he was acting normal chasing imaginary critters. Marjie went to look for him and found him lying there dead. He had blood in his chest. I think he had a tumor in his heart. We were devastated.”

Niemann may have had a horrible start in rescue, but here is a description from a 2019 post of Neimann’s life while at horse shows with his family that sums up how loved he was:   “He sleeps till around noon, eats his breakfast, lays in the grass, rolls around some, might wander some and then wants back in his air-conditioned horse trailer. Later in the afternoon he will go in his golf cart down to the stalls, let everybody pet him and fuss over him, he usually goes out to eat at a restaurant, comes back to the trailer, watches a little TV and goes back to sleep! He always knows when it's the last day of a show and hangs out by the truck a little bit more. It doesn't matter to him if we're in Tampa or Ocala or Oklahoma! Thanks for saving him!”

Niemann loved riding in his golf cart, so we know he’s riding one now at the Rainbow Bridge…  Ride on Neimann! 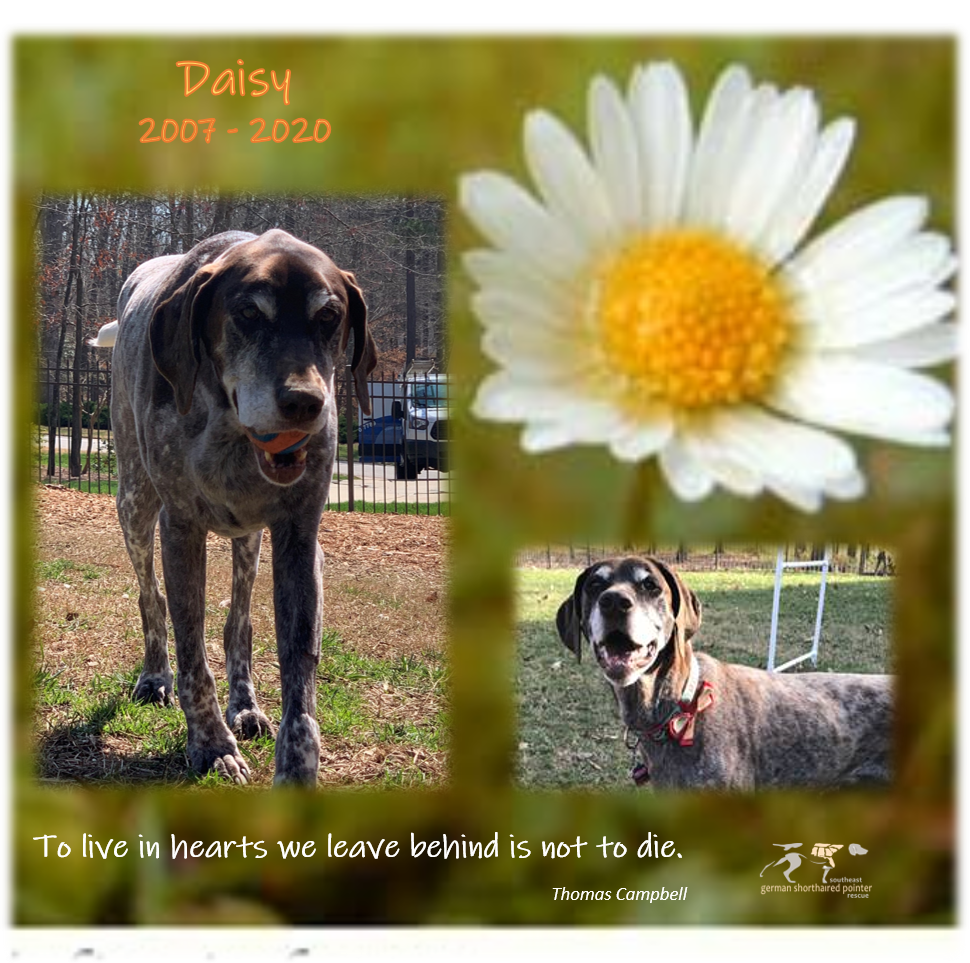 Very sad news to share… our sweet senior alumna Daisy traveled to the Rainbow Bridge. Daisy won the jackpot of forever homes with the Parson family in 2017. Daisy and her sister, Ellie Mae were surrendered to an animal shelter since their owner had health issues.  Ellie Mae passed away shortly afterward but Daisy thrived at the Parson home.  From her mom Michelle:

“It is with heavy heart that I tell you Daisy succumbed to a catastrophic bleed late this afternoon and we had to let her go. 3 weeks ago we rushed Daisy to the ER for an emergency splenectomy and found out she had hemangiosarcoma. We were told her life expectancy would be 3 weeks to 3 months and being a Parson pup we thought for sure she’d make it at least 3 months. She had a wonderful 3 weeks but HSA is a horrible aggressive cancer that took our precious Daisy too soon. She was playing ball and enjoying the sunshine Thursday and now she’s gone. We are heartbroken and in shock but so thankful for the 3 years we had with our Daisy. Thank you for all that SEGSP does to give dogs like Daisy a second chance at finding their forever homes. 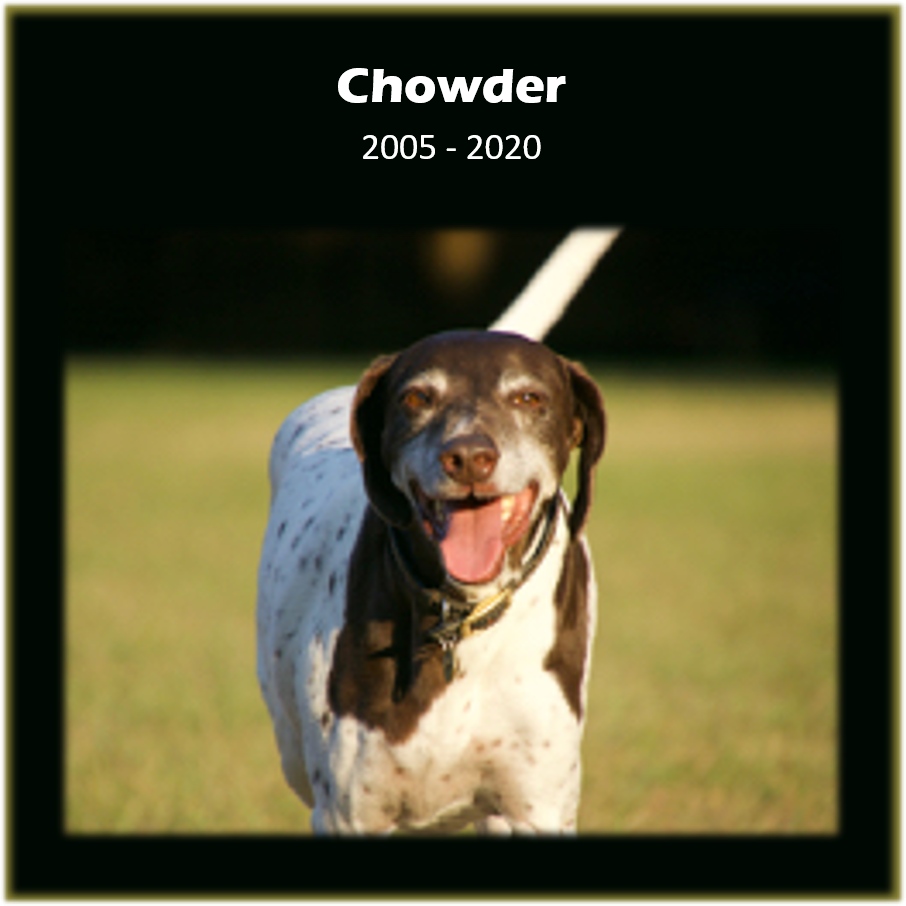 We were so sad to hear that our 2012 alumnus Chowder passed away last fall.  Chowder came to rescue at 7 years old in Florida and was fostered by our volunteer Shoshana who immediately fell in love and adopted him.  From Shoshana, “Once he claimed his spot on ‘the bench’ he decided he was never leaving.  He was stubborn, sweet, and an accomplished lizard hunter. It’s strange not having to race him for my pillow every night.”

We know Chowder was deeply loved and very well cared for by his mom.  Rest in peace sweet boy…
​
“There is a cycle of love and death that shapes the lives of those who choose to travel in the company of animals.  It is a cycle unlike any other. To those who have never lived through its turnings or walked its rocky path, our willingness to give our hearts with full knowledge that they will be broken seems incomprehensible.  Only we know how small a price we pay for what we receive.  Our grief, no matter how powerful it may be, is an insufficient measure of the joy we have been given.”  Unknown 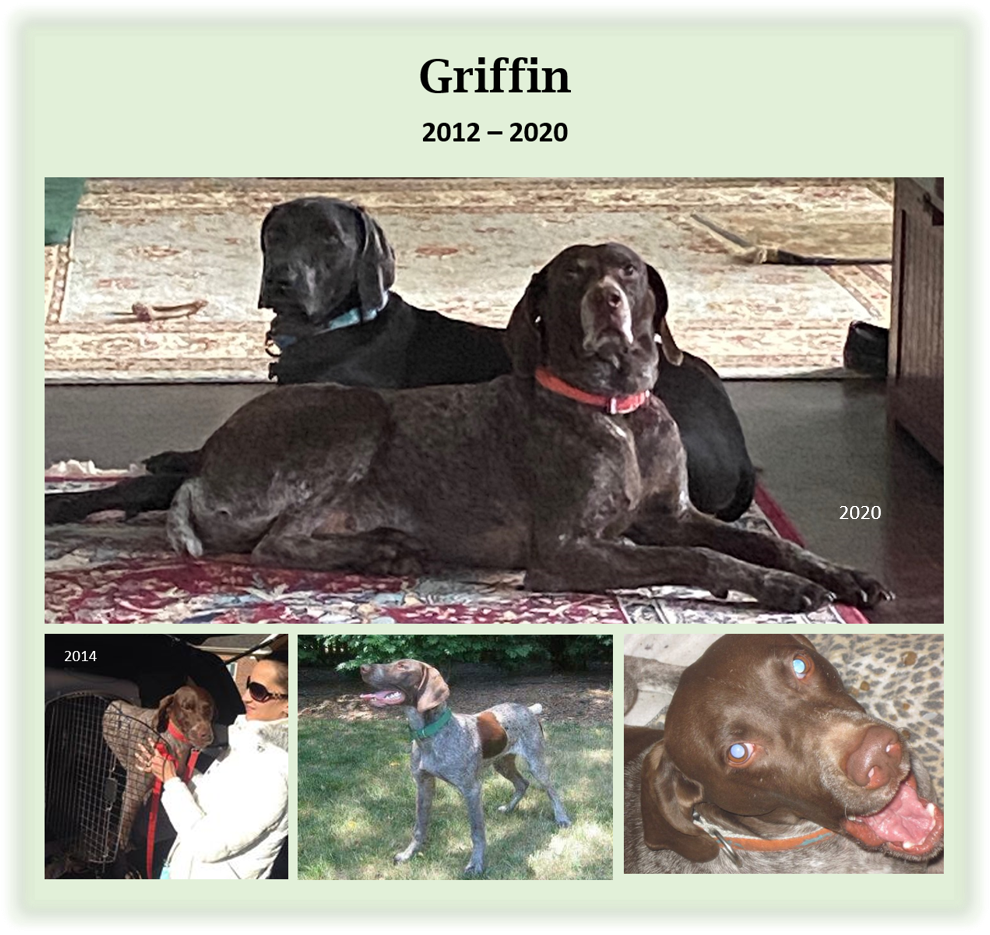 We sadly said goodbye this week to our 2014 alumnus Griffin (formerly Korben).  From his mom Kerry:
“It's with a heavy heart that I update you for the last time on Griffin. After being a happy, if albeit slower, guy the last month or so - on March 23rd his lymphoma cancer caught up with him and he stopped eating.  Our vet had been amazed he did so good for so long.  His seizures were infrequent & less severe.  When we got the cancer diagnosis, the prognosis was only a few months and he thrived for more than a year (with multiple visits to splash in the creek). His weight stayed constant and he was himself until just prior to his sharp decline. …We eased him over the rainbow bridge in the car while on his favorite dog bed. We laid him to rest with his favorite ball under a young maple in the field he loved to run through to get to the creek.  Wild daffodils mark the spot. We are still devastated. He was the best “bed dog” (not bird dog) and so appealing.   He had a zest for life and sticks and splashing in the creek -no matter how cold- like no other dog we’ve ever had. His brown eyes were so soulful & expressive; his intelligence and friendship will be sorely missed.”
From our GA Coordinator Terri: “He was the first dog that Dan and I fostered after moving to Georgia.  They are a wonderful family that gave Griffin the kind of home a dog dreams of.”   Run free sweet Griffin… 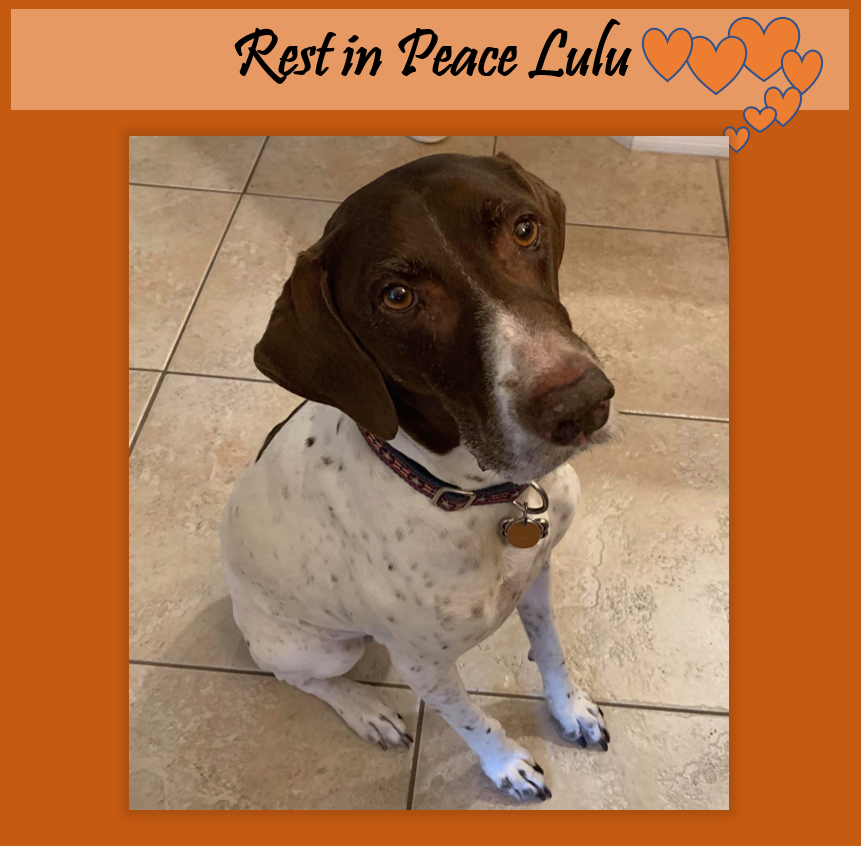 Our hearts are breaking…2011 Alumna Lulu has passed away. She turned 11 in July and her Mom Sheila said she was the best cuddler in the house and made their family complete. Lulu had a malignant tumor removed from her nose 2 years ago and then another tumor in her leg a couple months ago. Her bloodwork looked fine however yesterday they rushed her to the Vet and the xrays showed a mass on her spleen and kidneys. It was very sudden and heartbreaking for her family.